Let’s hope Baton Rouge does not see any yard sales like this one: a Wisconsin woman caused a traffic jam earlier this week by holding an “X-husband” sale in her front yard. She placed signs reading “X-HUSBAND SALE” and “FREE” in front of her house accompanied by piles of her ex’s belongings.

But what really stopped cars was the GMC Yukon SUV parked out front, its tires flat and its once-green exterior marred with the word “cheater” and various obscenities in bright-colored spray paint. 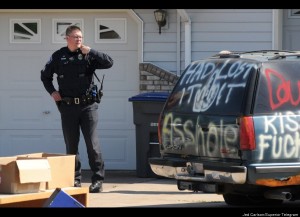 According to local radio station Mix 108, police arrived at the house around 4 p.m. and spoke with a woman inside. An hour later, the defaced SUV was towed from the driveway to keep traffic moving, but the piles of clothes, boxes, and other unwanted goods scattered across the front yard remained.

So what set off this post-split purging? According to court docs obtained by the Superior Telegram, the woman who lived at the address filed to divorce her husband last July. An unnamed neighbor told the paper that a group of people began preparing for the yard sale Tuesday afternoon, after the divorce had been finalized. 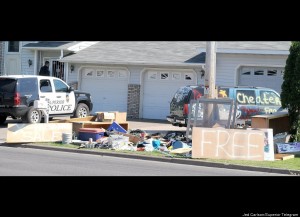 While she certainly made a statement, the woman could have have forgone the “FREE” sign altogether and made a buck off her ex’s discarded items — as other scorned spouses have done. Craigslist is a clearinghouse for people looking to rid themselves of their ex’s junk, while sites like NeverLikedItAnyway.com allow the brokenhearted a forum to vent while purging.